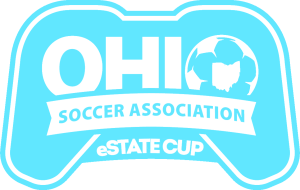 Sign up today to compete against fellow EA Sports’ FIFA 23 fans from around our state and become the first Ohio eState Cup champion. The winner of this tournament will also receive several prizes, listed below.

The opening round of the Ohio eState Cup will begin as early as Monday, December 12, 2022. Each player will be placed in a group of four and play three games, 1x against each other opponent in the group. Players will receive 3 points for a win, 1 point for a draw (tie), and nothing for a loss. The top player from each group will progress into the knockout rounds.

Be sure to join our Discord server dedicated to the eState Cup for all tournament communications and to connect with fellow cup participants!

Space is limited! Register today to prove that you are the best amateur FIFA player in Ohio and beyond! Must be 11-17 years of age to participate.

You do not have to play soccer to participate.

Prizing for the tournament includes (prizes subject to change) 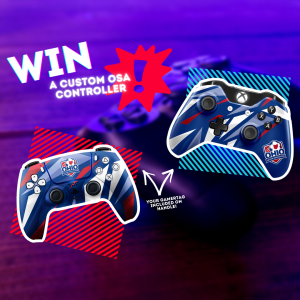 IMPORTANT: We require verification of every final score via a screenshot at the end of the game. Only one player needs to submit. Participants may submit on the Discord channel, via email to jgould@ohio-soccer.org, or via text to 513-205-8600.

1.1 Eligibility: Players must be between 11-17 years of age to participate in the tournament. You do not have to play soccer to participate.

1.2 Geo Restrictions: Players must live within Ohio to register.

1.3 Amateur Eligibility: Players must be amateurs to register and participate in the tournament.

The tournament format is as follows:

Players are responsible for submitting results after games via a screenshot of the final score using one of the following methods:

Officials will use these submitted results to confirm and update scores on the backend. In the case of any disagreements concerning score, players should keep a screenshot for Officials to settle the issue.

4.1 Sportsmanship: All Players will be required to uphold and observe a universal level of sportsmanship. Unsportsmanlike conduct includes, but is not limited to, racism, use of profanity, rude acts, vulgar acts, acts of belligerence, and disrespect of an Official.

Unsportsmanlike conduct may be Disputed and may be grounds for Player Disqualification by an Official. Rulings on unsportsmanlike actions are subject to the Official’s interpretation and assessment of seriousness. If a Player is found in violation of this rule the following actions may happen:

Any accusations of unsportsmanlike conduct by a Player or must be brought to the attention of the Official by filing a dispute following the Match in which the alleged action has occurred for investigation by a presiding Official.

4.2 Player Handles/Gamertags: Handles/Gamertags may not contain profanity, racism, sexism, references to illegal drugs, or general vulgarity. Players found with offensive Handles will be approached by an Official and asked to edit their Handle to something more appropriate.

4.3 Cheating: All forms of cheating in matches are forbidden and will be penalized by Officials. Players found cheating may be barred. By breaking any rule a player risks being completely excluded from all tournament proceedings.

5.1 Hosting Matches: For each Match, responsibility for formation of a match lobby will be granted to the higher seeded Player. For online matches, If a connection cannot be established, a different Player should attempt to host.

5.2 Side Selection: The higher seeded player will play Home, the player accepting the invite will play Away. This side choice will apply to all Games within the Match series.

5.3 Player Disconnects & Game Restarts: A Game Restart is defined as the decision by the Officials, at its sole discretion, to begin gameplay from a previous point in the Game. Situations in which the Officials may deem a Game Restart to be appropriate include but are not limited to a critical malfunction of Provided Equipment or the occurrence of a Major Bug.

The below match rules apply to every match in the Ohio eState Cup:

It is the responsibility of both Players to verify that the Match settings are correct prior to starting a Match. Once a Match has begun, Players may not restart or replay due to incorrect Match Settings, unless both Players mutually agree to do so.

6.1 Outside Voice Applications: Players are permitted to use the Tournament Discord as a voice application.

7.1 Dispute Process: A Player has the right to Dispute any opposing Player they feel is in violation of these Game Play Rules. Disputes must be filed by consulting an Official immediately following the conclusion of a Match. A Player who is Disputed has the right to subsequently file a Dispute against the other Player as well.

All Disputes must be filed within 12 hours following the completion of the Match. A Match must be reported regardless of whether a Dispute is being filed. If a Dispute is filed too late, the Dispute may be disregarded.

7.2 Evidence Requests: If a Dispute has been filed, Officials may ask Players involved in the Dispute to request additional evidence, which may include screenshots, logs, and/or replays. If so, the Players will then be required to promptly begin submitting all requested evidence to the Official in charge of the Dispute.

7.3 Discussion of Disputes: Disputes should only be handled in private between the Officials and those Players directly involved. Raising a Dispute as a public matter for the purpose of appealing, criticizing, or complaining about the verdict may result in Player Disqualification and/or Match Forfeit, depending on severity and malicious intent as determined by the Official.

If a Player attempts to manipulate or exploit these Game Play Rules in any way other than for its intended use, Officials reserve the right to make a final ruling on the rule in question for the given Match and/or Disputes